WHO IS ROD GREY?

Hi, it's me, Rod Grey! I was born in Geelong, Victoria, before Mum and Dad moved up to Townsville, Queensland. I grew up there and spent 35 years in that great city (I don't miss the heat, though!). It was there that I fell in love with cricket.

Mum always had a picture of the late great Rod Marsh hung on the wall. He was her favourite player, and as I got older, that picture would make its way into my room. I bugged everyone to play cricket with me since I was about 5 years old; at the beach, in the back yard or inside the house. I started playing officially at the Currajong Indoor Centre, but outdoor cricket was where it was at for me.

I played for Norths Cricket Club in Townsville and was coached by some great players like Bernie and Colin Lamont, Alf Wilson, Mr Lavrack, Ray Gartrell, to name a few. My Mum had found Rick Heilbron, a private coach, who taught me technique, allowing my cricketing ability to take off. I have always been a shorter kid, so the pull and hook shot was where most balls would go. I didn't realise it, but Rick had got a custom bat made for me by the great Julian Millichamp just as Millichamp and Hall were taking off. It was a perfect bat for a 15yr old, short, back foot player...I just didn't realise its significance until I started making bats myself.

I played rep cricket as a junior but unfortunately didn't take the fitness side of it seriously. While I loved playing cricket and was always good at it, I just didn't train hard enough...probably regret that the most from my playing days.

I played 1st grade cricket in for Norths Townsville from age 16 - 35yrs. Playing with and against some of the best Queensland State and Country players like Mitchell Johnson, Ben Edmondson, Blair Copelin, Craig Skau, Brian Hawke, Steven Farrell, Darren Frakes, Scott Connor, Ben Schuhmacher, Tom Franklin, Chris Adams, Steve Baker, David Todd and Glenn Seri to name a few. Once my son was old enough and started playing cricket, coaching his sides took a priority over playing. I fell in love with coaching and soon enough it was my son playing rep cricket and making more runs than I ever did at his age. Years later, his cricket is what brought us to Brisbane.

I was lucky to get an apprenticeship as a signwriter with the extraordinary Philip John! Phil is really an artist; it's just that signwriting paid the bills. I was lucky enough to experience his abilities to make anything he wanted. He could paint realistic murals really fast, make styrofoam cars for car dealerships, 3D dragons for casinos, and bring to life almost anything you can imagine. I didn't appreciate or realise how valuable that would be until I was working for myself years later.

Together with my wife, we did some great signage projects in Queensland managing projects for Queensland Country Bank, Stadiums Queensland, North Queensland Cowboys and a ton of local businesses.

When my daughter was 3yrs, we discovered she had a tennis-ball sized tumour at the base of her brain...that was a life-changer. Thanks to the amazing doctors and medical professionals at the Townsville Hospital, it was removed, and we were extremely lucky it was not cancerous. There have been some bumps along the way but our daughter is going strong, living a normal life (and she loves cricket). This whole situation made us look at what we are doing with our life and where we want it to go. Cooper Cricket was only in it's infancy at that stage, but it reinforced to me what I'm truly passionate about. 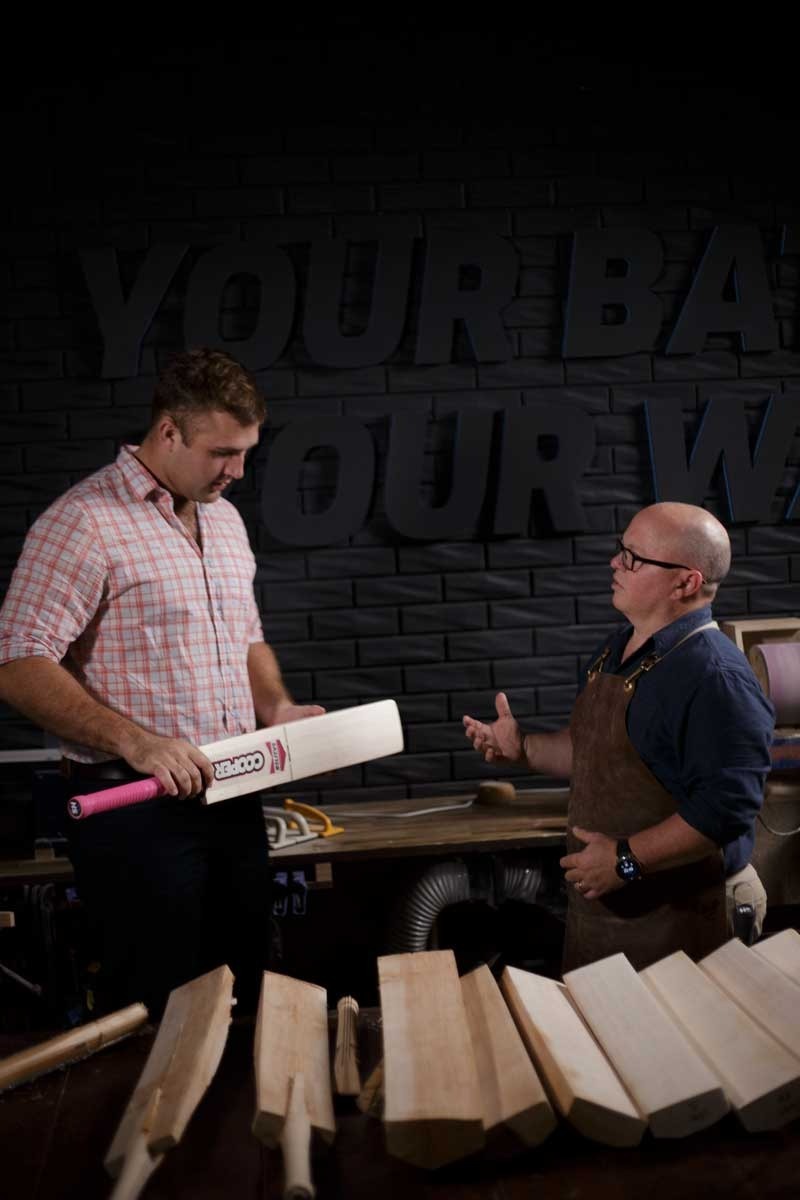 Can't go past a great steak with red wine jus. I've also been trying to give up KFC for about...my whole life!

I really wanted a V100 from Sportscene but it was miles too big and heavy for me. After a game one day my Mum bought me a Gray Nicolls Dyna Drive! It was still way too big for me but I loved that bat.

I keep buying more tools that it will make things easier and better!

I have a few... Jerry Maguire, Moneyball and Chef.

where does the name come from?

When I was trying to figure out what this cricket brand was going to be called, I struggled to figure it out. I was drawing blanks, and I was feeling creatively dead at this stage of my life. I had a few ideas like Origin or Grey Cricket, but what did that even mean? A mate of mine told me that it had to really mean something; something personal.

My wife and I had been trying for another baby, but it just never worked out for no reason in particular. I'm not sure what the name would have been for a girl; however, his name would have been Cooper if it was a boy. Given that this is like my little baby...Cooper Cricket was born. The name worked, and as it turns out, I wasn't creatively dead after all! I could see the logo straight away.

A little while later, I also found out that a 'Cooper' was the name given to wooden barrel makers back in the day. The barrel maker's tool of choice was a drawknife. A drawknife is a tool used daily by cricket bat makers, so it was a nice little coincidence. I wish I could say I planned it!

where to from here?

Being an independent cricket company can be as challening as it is rewarding.

We keep doing what we are doing. Keep delivering excellent products with quick turnarounds and giving industry-leading support every step of the way.

We love what we do, and we want to genuinely help you as the cricketer to have the best experience you can on and off the cricket field. Our job is to enhance your performance and we take this very seriously.

Thanks for taking to time to read through my life! If you would like to get in contact with me, please email rod@coopercricket.com.au

Regular Trading Hours - Monday to Friday 9.30am to 4pm. Saturday 10am to 1pm. Sunday open by appointment only.